Guide to rowingAll the terms you'll need to be a professional rower.
2 August 2019

St Neots rowers had lots to celebrate at their home regatta this year after chalking up seven incredible wins. They included first-timers, juniors, old-hands and some nail-biting finishes that thrilled crowds braving rainy weather to watch the action on the Ouse.

The men’s crew of Graham Mailer, Clive Emmerson, Steve Fox, Mick Staddon and cox Alex Johnson had double celebrations after winning twice. They beat a crew from Broxbourne on Saturday’s 1,000m course, in the masters BCD 4+ final, and a Sudbury crew 24 hours later over 500m in the masters DE 4+ final. Their one-foot winning margin on the Sunday provided one of the weekend’s tightest victories, much to the delight of those gathered on the riverbank.

Saturday was also a big day for club captain Stuart Williams. After 18 years of competing, and several wins in sweep-oar events and at head races, he enjoyed his first-ever win sculling at a regatta; he and Jim Farrell won the Masters E 2x category, beating Oundle by one and a half lengths.

The silverware kept coming on the Sunday when the mixed 8+ crew of Rachel Tackley, Gemma Noonan, Rachael McLuckie, Gaelle Jupe, Trevor Rickwood, Rob Stirling, Russell McIntyre, Federico Tiezzi and cox Tim Neill beat Boston by just three feet. Most of them were tasting victory for the first time – and some were competing in their first-ever regatta.

Not to be out-done, juniors also won for the first time. Ava Gissoni, Juliette Moutel-Davesne, Alex Johnson, Owen Sainsbury and cox Emma Johnson put in a powerful display to beat Milton Keynes by one and a half lengths in the mixed 4+ final. 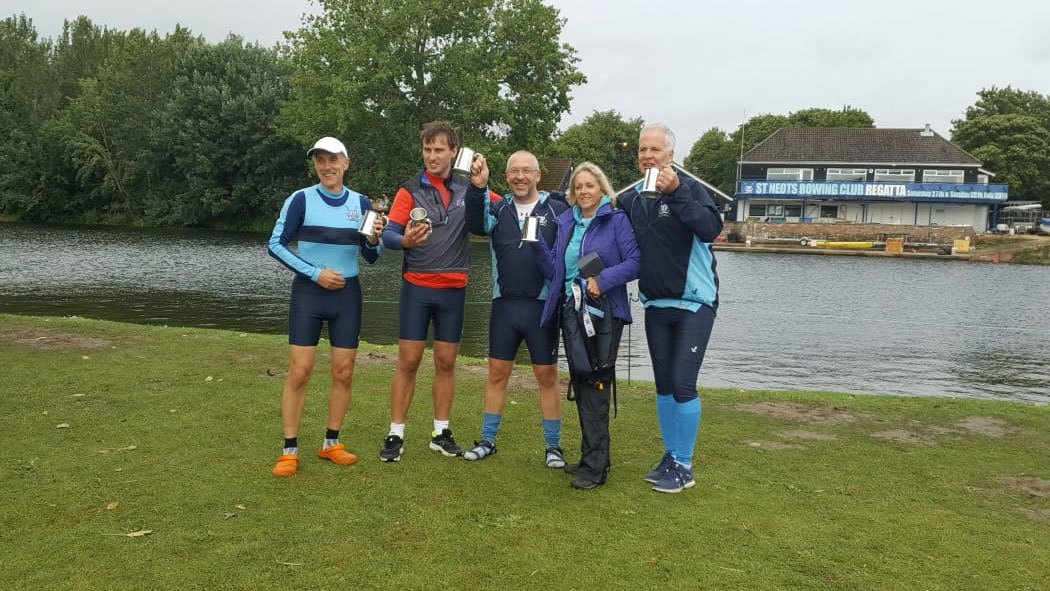 Last but not least, the quad crew that rowed 100km in this year’s Ringvaart marathon, in Holland, proved they could also sprint as a sweep-oar crew; Richard Bray, Kieron Marriner, Dave Cullen, Karl Zwetsloot and cox Debra Hellett eased to victory over Peterborough by three lengths in the masters BC 4+ final.

“What a fantastic regatta we put on this year,” said club captain Stuart Williams. “Despite the weather, the St Neots Rowing Club spirit never ceases to amaze me.

“Not all our members get to row at our home event, but those who did this year produced some great performances. I am particularly proud of our novice rowers, some of whom were competing for the first time and won their first pots. Well done!”