Guide to rowingAll the terms you'll need to be a professional rower.
24 August 2018

Two wins apiece for Jim and Fergus at Peterborough 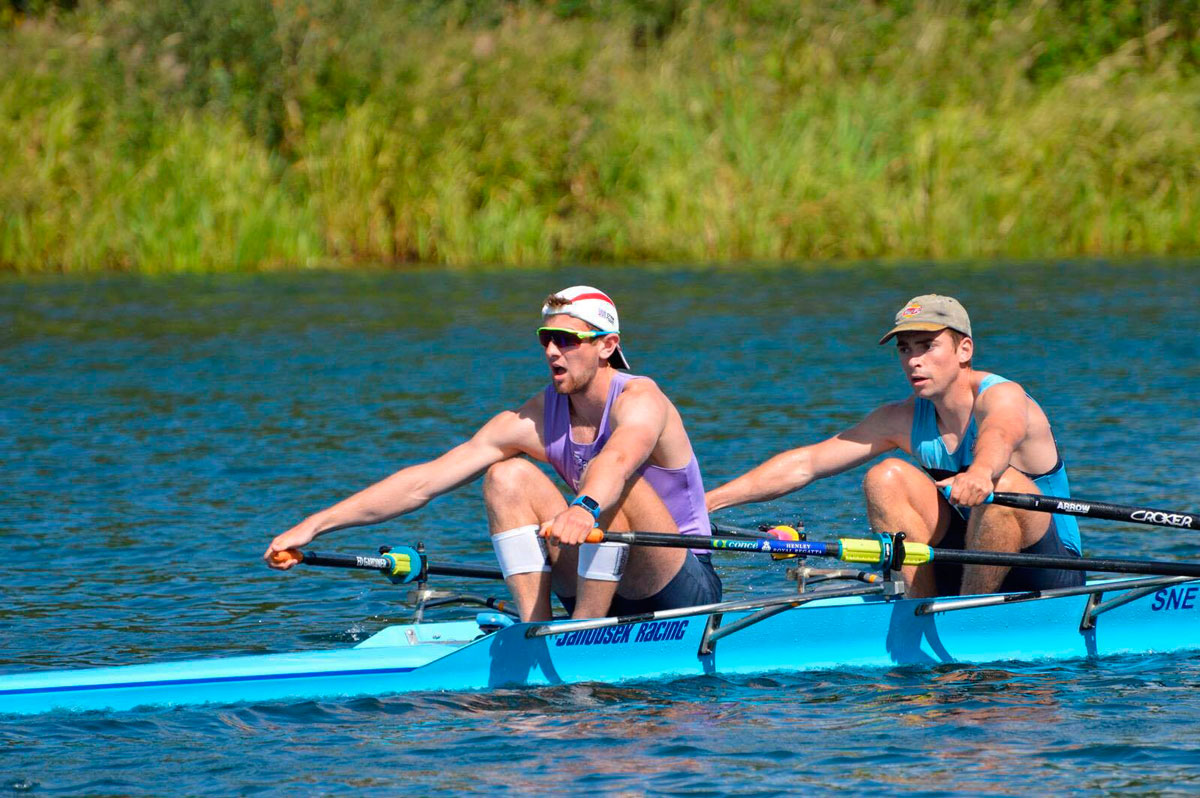 Fergus Mitchell-Dwelly (right) and Ed Gardner on their way to victory in Saturday’s 2x band one final.

Peterborough has provided rich pickings for St Neots rowers this year. Our ladies eight crew stormed to victory at this year’s Peterborough Spring Regatta, and we had multiple winners at the city’s two-day summer regatta.

Leading the way for St Neots were Jim Farrell and Fergus Mitchell-Dwelly, who notched up two wins apiece over both days.

On the Saturday, racing over 1,000m, Jim cruised to victory in his masters E/F 1x final, crossing the line 16 seconds ahead of his nearest rival from Milton Keynes.

It was a similar story for Fergus: he won convincingly alongside Ed Gardner from Durham University in the 2x band one category, crossing the line 20 seconds ahead of the second-placed Peterborough and Worcester composite crew. Fergus was also in action in the final of the band one 4x- category, finishing second to Mosley in a St Neots, Huntingdon, Leeds University and Broxbourne composite.

Racing on the Sunday over 500m, Jim won again in the masters F/G 1x category, finishing in 1 min 58 secs. Fergus changed from sculling to sweep oar, and had a new partner in Adrian Vuylsteke, and the two of them breezed home to win their 2- band two final in an impressive 1 min 37 secs.

Also celebrating on the Sunday was Andrew Lawrence, who won a tightly contested 1x band three final in 1 min 43 secs – a victory made all the sweeter after he unfortunately capsized during Saturday’s 1x band two heat.

It was a frustrating weekend for Will Todd and Anna Shreeves: Will lost in his 1x band one heats on both days, and Anna suffered the same fate in the women’s equivalent event on the Saturday. She finished third in Sunday’s 500m final in the same category, and she and Will were knocked out in the repecharge for Sunday’s mixed 2x band one event.

That left Sarah Leatham and Frankie Murley to battle it out in Sunday’s women’s 1x band three category. Frankie was competing in her first ever regatta and for Sarah it was only her second, after making her regatta debut in the wind and rain at St Neots. They finished second in their respective heats and were knocked out in the repecharge by the event’s eventual winner, from Cantabrigian. Frankie just edged Sarah in the repecharge, but both can feel proud of their performances so soon after moving up from our beginners group earlier this year.

I am thrilled for everyone who took part at Peterborough Summer Regatta,” said Stuart Williams, club captain. “We had members competing at all ages and they all did the club and themselves proud. We have a really exciting year ahead with so many new, returning and established rowers at the club. We can hopefully look forward to more great racing and even better results.”