Guide to rowingAll the terms you'll need to be a professional rower.
17 January 2020 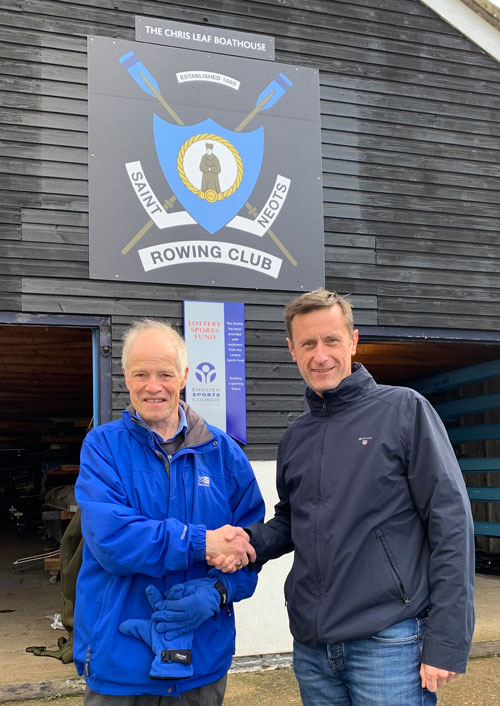 St Neots Rowing Club has smart new signs and a new name for its boathouse, in honour of a much-loved member who passed away in 2018.

The new signs, which display the club name and crest, replace those erected when the current boathouse was built in the 1970s. It was originally named the Jubilee boathouse, to celebrate the Queen’s first 25 years on the throne, but it is now called the Chris Leaf boathouse to commemorate someone who played a massive part in the club’s development over several decades.

Club chairman Trevor Rickwood (pictured right, in dark blue) said: “Our old signs were looking tired and dog-eared, so these new ones really smarten up the site’s appearance for visitors and members.

“Updating the signs also gave us the perfect opportunity to honour someone whom we miss terribly. Chris was a former captain and chairman and worked tirelessly in several other roles at our club; he was also a coach, an umpire and, in his younger days, a top-drawer rower.

“We already have a boat named after Chris, and we wanted to do something that could provide a lasting tribute to him.”

The club’s president, Robin Davies (pictured above, in light blue), knew Chris for more than 40 years and the pair used to row together regularly. “There were times when Chris pretty much ran our club and held it together single-handedly,” said Robin. “He played a huge part in the lives of hundreds of members, past and present, as well as in the wider rowing community.

“He’s greatly missed by us all, so I’m really pleased we now have this permanent memorial to him.”

After many years of neglect, photocopying and various reproductions, the artwork of the club crest had lost quality and detail and needed to be redrawn with modern design software. Club member and local graphic designer, Richard Slade, set about researching club archives, libraries and museums the original logo and what it looked like. Richard then spent many hours redrawing digitally in excellent detail a new crest, reincorporating missed elements of the logo that has been lost over time, such as the priory monk’s facial features and the golden torc he would have worn. We now have a digital logo that is ready for many more generations to use.