Guide to rowingAll the terms you'll need to be a professional rower.
15 August 2016

You wait two years for a win, then two come along at once at Sudbury Regatta 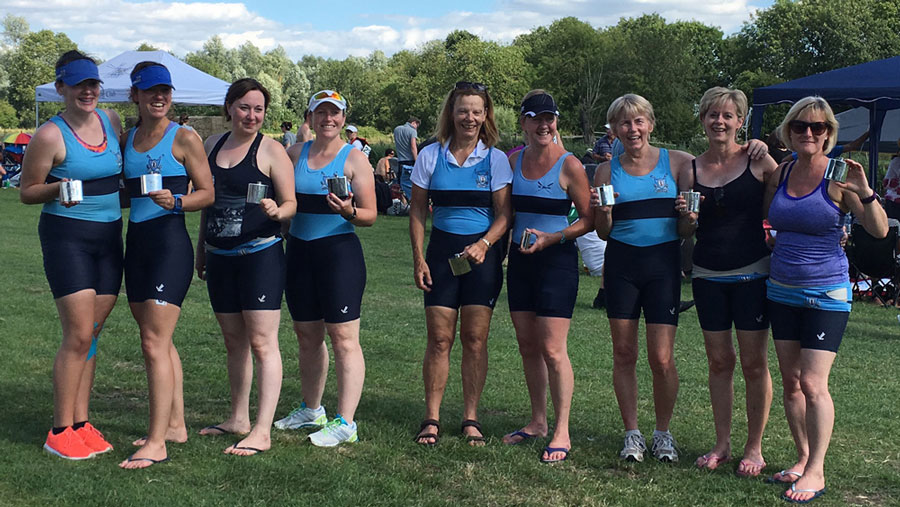 Our senior ladies were smiling as brightly as the weather after they won twice at this year’s sun-soaked Sudbury regatta.

Ali Brown, Marlene Taylor, Sarah Davies and Dionne Page scooped the Don Cooke Memorial Cup in their women’s masters D/E 4+ final. Victory never looked in any doubt as they rowed clear of their Sudbury opposition in a composed performance, never losing the three-length gap they opened at the start thanks to their masters handicap advantage.

They were then joined by Jaione Echeveste, Ali Young, Corinne Henson and – taking a break from umpiring duties – Helen Knowles for the women’s masters D 8+ final. This was a much tighter battle, and the ladies had to dig deep to beat an Isle of Ely/Sudbury/Bedford/ Furnivall Sculling Club composite crew by just half a length. Victory was swiftly followed by a cooling swim for Corinne Henson as crewmates helped her celebrate the loss of her novice status.

“What a way to end two years of coming second – or worse!” said a delighted Ali Brown. “We’ve had some great performances these past two summers but never quite managed to quite get across the line first. We ended our drought in style at Sudbury.” 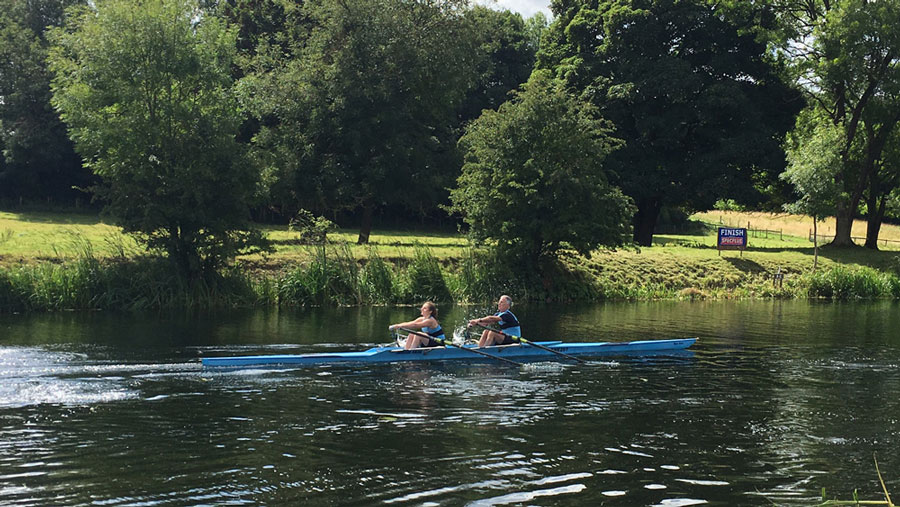 Clara and Karl Zwetsloot in the mixed IM3 2x.

Other members competing this year at Sudbury included Tash Holdaway, who reached the final of the women’s novice 1x, plus father-and-daughter duo Karl and Clara Zwetsloot in the mixed IM3 2x, although a confused commentator announced that “grandfather and granddaughter” were coming down the course.

Rob Stirling and Dave Cullen were among many rowers to collect some Sudbury riverside greenery, in the novice 2x category, but still crossed the line looking unruffled at only their second regatta. The men’s 4+ of Kieron Marriner, Bob Hetherington, Trevor Rickwood and Karl Zwetsloot were unable to progress beyond the masters D/E first round, but they did manage a respectable performance alongside Jaione Echeveste, Tash Holdaway, Clara Zwetsloot and Corinne Henson in a mixed 8+ – despite the crew having never rowed together before and racing in an ‘elite’ category.

“Well done to everyone who competed at Sudbury, especially Corinne for losing her novice status,” said ladies captain Jaione Echeveste. “It was a long but really enjoyable day, and we’re already looking forward to returning next year.”