Guide to rowingAll the terms you'll need to be a professional rower.
11 July 2018 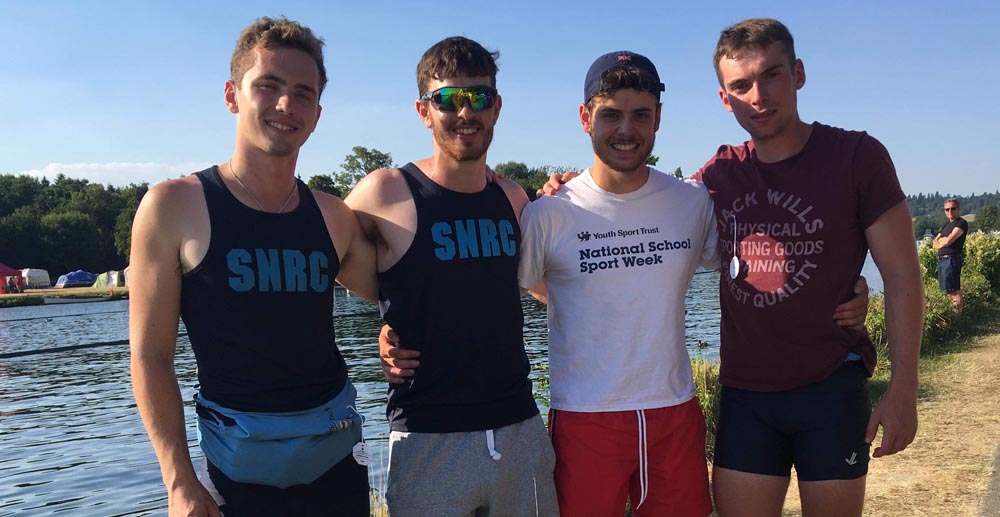 St Neots Rowing Club found itself in uncharted waters at this year’s Henley Royal Regatta, when it had two men’s crews lining up to compete for the Wyfold Challenge Cup. What made this so unusual, however, was how it came about and the unfolding drama of the day.

The Wyfold Challenge Cup is a coxless fours race for crews from the UK and overseas. Of the eight St Neots rowers involved this year, seven started at the club as juniors and have continued to train and compete for the club as they have developed into top-class rowers. However, preparations for Henley couldn’t have been more different for the ‘A’ and ‘B’ crews.

The ‘A’ crew of Dom Chapman, Josh Dexter, Max Taylor and Bryce Taylor has trained together all year and competed at premier events leading up to Henley. The guys proved they were worthy of a place among the 32 crews competing for the cup, which they gained at the qualification race the previous week.

The ‘B’ crew of Nick Shorten, Adam Williams, Adrian Vuylsteke and Fergus Mitchell-Dwelly was forced to train apart due to other work commitments and only came together two weeks before Henley qualification. They did extremely well, but were disappointed to be the fastest non-qualifiers at the qualification race.

However, less than 24 hours before the regatta, organisers called to say another club had withdrawn and invited the St Neots ‘B’ crew to compete. After frantic phone calls and messages, we confirmed we could race, but that involved the crew converging on Henley from different locations around the UK.

St Neots ‘A’ were first off but, despite their meticulous preparation, they came up against a classy crew from Star Rowing Club in Bedford. A brave attempt by St Neots to knock their opponents off their stride in the first 500m drew a measured response from Star, who overhauled St Neots, knocking them out in the first round.

Then it was the turn of the St Neots ‘B’ crew, who had no time to prepare other than paddle to the start – but that didn’t stop them scoring a dramatic win over Worcester Rowing Club, in what Olympic legend Sir Matthew Pinsent described as ‘a race that had everything’.

The first-round contest had to be halted after a few strokes because oars were clashing but, after the re-start, the St Neots men pulled into a lead they never lost – despite several predictions by TV commentators that they wouldn’t be able to hold on. A dramatic late surge from Worcester reduced the winning margin to just two feet, much to the delight of everyone who was watching.

Sadly, the St Neots men’s Henley adventure ended in the second round the following day, when they lost to a crew from Wairau Rowing Club in New Zealand. But it remains a memorable couple of days for everyone who was at the event and watching the live broadcast online.

“We couldn’t believe it when we got the call to go to Henley,” said Adrian Vuylsteke. “We had to use the ‘A’ crew’s boat – and we have to thank them for helping to change its set-up so quickly for us, despite being so disappointed by their loss.

“We had time to practise one start as we warmed up, and then we were live on the Henley YouTube channel in front of people watching all over the world.

“We fought hard all the way to stay ahead and just managed to hold on at the end. Sadly, we couldn’t repeat the win the next day, but the experience was something none of us will ever forget.”

Club captain Stuart Williams said: “I was immensely proud of both crews. Just getting to the start of such a prestigious event is a massive achievement for St Neots Rowing Club. To have witnessed the ‘A’ crew’s hard work and to support them over the season, and to watch the ‘B’ crew as a parent and captain of a rejuvenated junior crew, was amazing and a true inspiration for the club and all other club rowers.”

St Neots ‘A’ crew round one

St Neots ‘B’ crew round one

St Neots ‘B’ crew round two