Guide to rowingAll the terms you'll need to be a professional rower.
2 July 2017 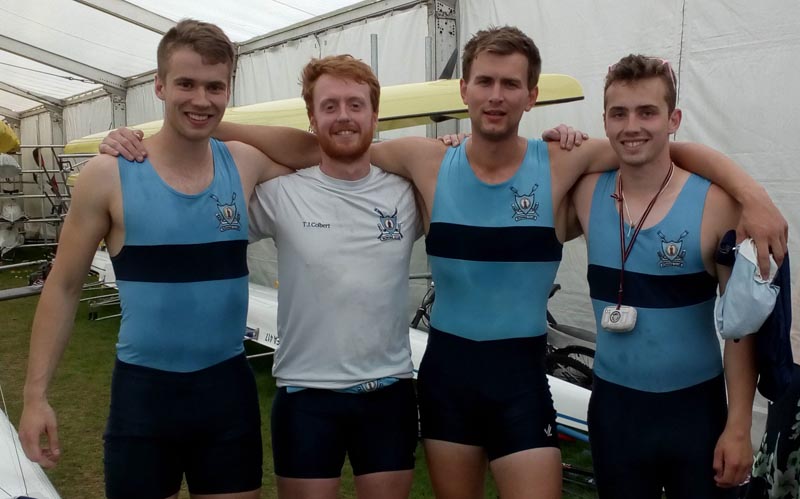 A coxless four crew from our club narrowly missed out on a historic win at this year’s Henley Royal Regatta – but just getting to the start line was a minor miracle after an injury almost wrecked their dreams of qualifying.

Bryce Taylor, Tom Colbert, Max Taylor and Nick Shorten were up against Akademischer Ruderverein Westfalen from Germany, in the first round of the Wyfold Cup. A stiff wind made conditions and steering tricky, and both crews received warnings for drifting too close to their opposition. There was a dramatic clash toward the end of the 2,112m race, when the Westfalen strokeman’s oar ripped the race number clean from the St Neots boat’s bow, but it made little difference to the result as the German’s crossed the line just half a length ahead of St Neots.

It was a brave performance by our crew, but what made it remarkable was the fact they rowed together for the first time just over a week earlier. Regular crew member Dom Chapman suffered a rib injury deep into their preparations, and so a last-minute substitute was needed to keep their Henley dreams alive. In stepped Nick Shorten and, in his first competitive outing with the others, the crew achieved the qualifying time needed to race at Henley.

“It was one of the better races I have taken part in,” said Max Taylor. “We perhaps knew we were not the most refined of crews, because of the last-minute crew change, but there was a sense of determination not to let our club or ourselves down, which was a powerful motivator. Even though we lost, we are still really proud of the performance.”

All races from this year’s Henley Royal Regatta were streamed live on YouTube. Click here to watch the St Neots crew’s race from start to finish.