Guide to rowingAll the terms you'll need to be a professional rower.
18 November 2014 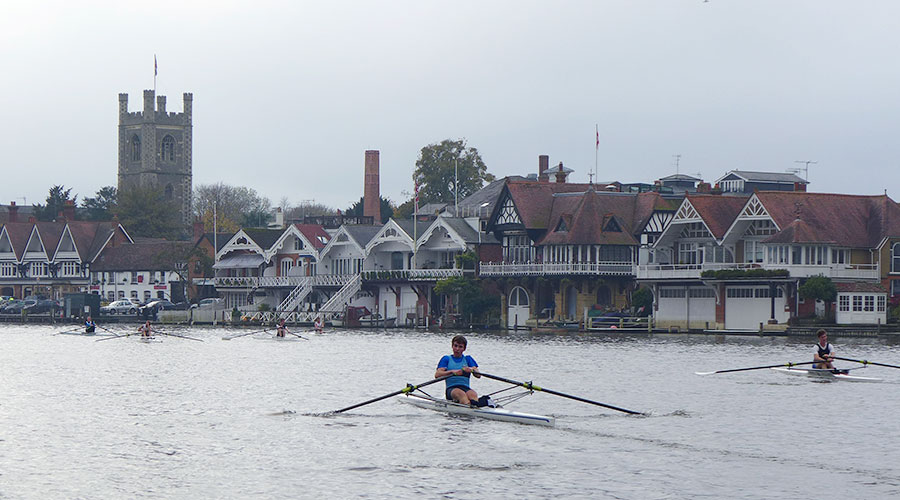 Head of the river fours

A team from St Neots Rowing Club consisting of Kate Lyster, Ellie, Olivia Taylor and Molly Harper coxed by Louise Shorten took on the challenge of the high profile ‘Head of the river fours’ event on November 6th 2014.

The Head of the river fours event takes the form of a processional time trial rowing race held on the Tideway (Thames) in London over a 6.8 km Championship Course from Mortlake to Putney.

Boating from Putney and rowing up to the start past the familiar landmarks of the varsity ‘Boat race’, the St Neots team who train on the river Great Ouse in Cambridgeshire had to adjust to the much rougher conditions and stronger flow of the Thames Tideway.

In their womens junior category, line honours went to Sir W Borlase GS BC, closely followed by the team from Henley Rowing Club. The St Neots Rowing Club team, who hadn’t previously rowed competitively together as a four, put in a solid performance to finish 11th in a time of 23 minutes and 50 seconds, beating the four from local rivals City of Cambridge.

Fergus Mitchell-Dwelly and Josh Davies also doubled up to row in the J18A 2X double scull while Zoe Adamson, Molly Harper and Kate Lyster and Louise Shorten teamed up as a quad to row in the WJ18A 4X- coxless quad category.

The St Neots girl’s crew in their WJ18A 4X- coxless quad posted a time of 13.09, exactly the same as Marlow RC which put them equal fourth behind third placed Bedford Girls School and the crews from Henley and Weybridge Rowing clubs who drew for first place with a time of 12 minutes and 29 seconds.

In the J18A 1x single scull event, St Neots Rowing Club top performer was Josh Davies who finished 8th in his category with a time of 13 minutes and 34 seconds, a mere 17 seconds behind the winner of this most hotly contested category. Fergus Mitchell-Dwelly was close behind with a time of 13.47 and an under the weather Adrian Vuylsteke dug deep to complete the course in 14.23.

For the WJ16 1X single scull category, despite having to take some swift evasive action 200 yards from the finish to avoid a fast approaching boys quad, Kate Lyster headed the St Neots trio with a time of 15.21,closely followed by Zoe Adamson who came in ahead of Molly Harper who was using the Henley event as an opportunity to shake down a new boat. In the WJ18A 1X single scull, Louise Shorten rowed a steady race to post a time of 15.34.

Star Club head of the river

On Sunday November 16th a group of St Neots junior rowers took part in the Star Club head of the river event held on the great Ouse in Bedford.

Hannah Towns took part in the womens junior (under 15) single scull, putting in a solid performance to finish third.

Rested from her exertions at the Fours head in London, Olivia Hooper took part in the women’s novice single scull category, scoring a top ten finish in this heavily contested category.

Talking about their exploits, St Neots Rowing Club Captain Ali Young said, “It’s been a really busy few weeks for our junior rowers who have been tested against some of the best club competitors in the country on some challenging stretches of water. As always they all gave 100% effort and doubtless the experience gained will pay dividends when regatta season comes around.”